When I Grow Up

Last month there was a swimming carnival hosted by the kids swim school. Evie was very excited and eager to take part (her brother couldn’t have cared less).

The first race was an absolute hit. Evie swam her best back stroke and beat the other kids to a podium finish. She was proud as punch holding her blue ribbon winner’s medal and insisted I take a photo and send it to my entire contact list. And what a Facebook photo this was! 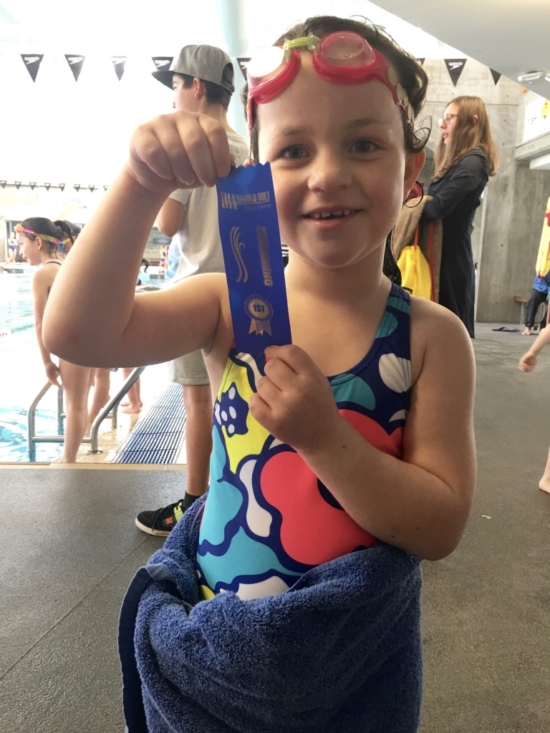 A few minutes later, it was time for her second freestyle race. This was actually an extra race put on especially for her as we had missed the freestyle race in her age group, which was held earlier in the day. She was swimming against only one other competitor, a girl many years her senior. From the word go, Evie trailed far behind her competitor, About half a metre before the finish, she stopped and refused to go further. I could see the pent up frustration coming out like steam from an angry dragon’s nose as she huffed and puffed her way out the pool.

What happened next would make John McEnroe look like a tame mouse with a quiet squeak. My daughter, my almost-7-year-old who has surely grown out of tantrums and is normally quite reserved in public, broke down and ranted and raved that the swim race was not fair as she wasn’t ready at the start.

Now let me tell you, this was no mere meltdown. This was a full body dance of flailing legs and arms, vocal cords being tested to their maximum and a top performance of “let’s embarrass mom and dad as much as possible in public”.

We eventually made it home (thanks to a modern day strait jacket called a safety belt), where I held my daughter in my arms and eventually the crying became hiccups and the tears became sniffles. This whole time I was thinking “how on earth do I explain this to her?” “How do I make her realize the importance of sportsmanship?” “How do I gently, but firmly, remind her that life will often be unfair, that we won’t be ready when others are, that we will want to win something so badly and will land up being bitterly disappointed?” “How do I empower her with the resilience to accept the disappointment and pick herself up and focus on what she has achieved  (like winning her first ever swimming race?” And so I spoke and she listened. I used many of the 2016 Rio Olympic analogies of athletes that missed out on a medal by a hair splitting fraction of a second (such good timing to be mid Olympic fervor!). I suggested she keep the scrunched up second place medal that she had threw down in a fit of frustration, and hold it up next to her winning backstroke medal and think about what she achieved with a win and a loss. I sat there praying that this will be one of the many life lessons that she can learn as a young child, that will help to develop her ability to deal with many greater life losses and frustrations that will still come her way.

The very following week, Evie and I spent an afternoon in the city. I took her for her very first experience of Italian pasta at Pelligrinis and we then went to see Matilda, the Musical. My inspiring daughter, this child who is reserved yet takes everything in and never misses a heartbeat, sat in the audience singing “when I grow up” at the top of her lungs amongst the quiet audience, so confident and sure of herself and her abilities.

I never knew she had learned every word by heart and was even more shocked that she was singing with such inhibition and such gusto . I watched in amazement and realized how much growing up I still have to do as a parent, and how my daughter will continue to surprise and delight me. Just like Evie, I too will grow up when I fumble and learn how to help her through some tough times, whilst allowing her to forge her own path through life. And I will do the most growing up, when I watch her and feel giddy with pride at how much has achieved. And that is worth more than all the ribbons and podium finishes in the world.